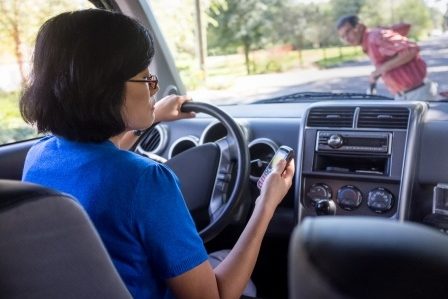 In today’s fast paced world, even the slightest distraction can cause an auto accident that can have devastating or even fatal results. Incidents as simple as a motorcycle that veers into a different lane unexpectedly or a child who runs into the street while trying to fetch a ball can pose serious risks to all parties involved. In addition, small technical issues such as an unknown mechanical fault or a broken tire can become significant risk factors while driving and attention is critical when behind the wheel. Accidents can happen in minor moments of inattention and can have dire consequences.

Knowing the most common driver distractions which leads to auto accidents will help drivers to better assess dangers and risks, as well as avoid difficult conditions and reach their destination safely and in a timely manner.  Here is a list which includes the top 3 most common distractions in Michigan:

Using a Mobile Phone While Driving

Although modern car technology and clever Bluetooth accessories make it easier than ever to use a phone hands-free, phone use during driving is the still the foremost distraction which leads to auto accidents. This is because modern mobile phones are equipped with numerous functions, software and applications that can act as distractions. Phones can act as radio players, personal computers, media players or game centers. Popular social networks like Facebook or twitter can also be considered dangerous, mainly because they require the full attention of the driver. Typically, phone use is particularly perilous because both the driver’s hands and eyes are taken away from the act of driving the vehicle. This results in slower overall response times during delicate and unexpected moments, especially during high speeds or busy areas.

In order to reduce the risk of accidents because of phone use, drivers should make a plan for their calls before going on the road. Also, drivers should make regular stops to answer or make important phone calls or to check their e-mails. Drivers should be fully aware of the current laws that regulate phone use while driving, and also bear in mind that many jurisdictions already consider it illegal.

Eating or Drinking Beverages While Driving

A very common distraction for many auto accidents is eating and drinking beverages during driving. Because of the hectic schedules and a lack of free time to thoroughly enjoy meals, many drivers opt to eat and drink while driving. Whether it is just a sweet snack or a full breakfast, eating should never be a priority when driving, mainly because it keeps your hands occupied and it requires attention during chewing and biting. These activities require multitasking skills which many drivers are not capable of. The attention is divided between numerous activities and the driving is the first one to suffer. As a result, the ability to react quickly to changing situations or miscellaneous dangers is greatly reduced. Also, the driver’s response times will be poor, greatly increasing the risk of accidents.

The solution to avoid this risk is to eat before embarking on a journey, even if it is a small meal which may probably last until you reach your destination. Another option is to pack food and eat it during rest stops or in parking lots.

Daydreaming and Other Outside Distractions

Daydreaming, has been reported by numerous studies to be a leading risk factor when driving. Similarly, outside distractions, such as the scenery, animals or other passengers inside the vehicle can pose serious risks to drivers. Daydreaming is potentially dangerous because it is considered a state of semi-awakening. Usually, drivers have their attention divided among the act of driving and living in a dream world and consequently, the risk of accidents is extremely high. In addition, outside distractions, such as looking at an ambulance and a team of paramedics that responds to an existing accident, can cause a second accident involving other vehicles. This can slow down traffic, reduce the attention span of other drivers and create a chain event.

A solution to avoid daydreaming is to always keep your attention on the road, regardless of the scenery, environment or other elements. When coming across an accident scene, focus on the road in order to avoid glass debris or other pieces of litter. This will reduce the risk of a second incident and will keep the speed constant for other drivers.