New Device To Help Cops Determine When Drivers Are Texting 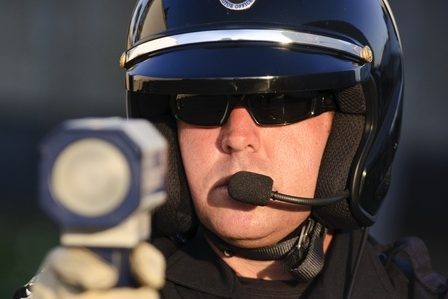 One of the latest developments on the road safety front is that of a Virginia-based company developing a device that tells cops when drivers are texting. A little more than a year after Michigan became one of the states to ban texting while driving, the irresponsibility of drivers who continue to flout the ban may soon be kept in check with the help of specially designed radar guns that the police can carry to detect mobile phone users, specifically those sending text messages, while driving.

According to the popular technology blog Mashable, the device will be equipped with sensors to detect radio waves from active cell phones inside a car. The device will not detect drivers who are using in-car systems or hands-free gadgets to talk on their cell phones. Instead, it will have the ability to isolate the frequencies being used for sending text messages from among all radio frequencies used for data signals and telephony. A spokesperson for the company, ComSonics, said that the technology is simple and not all that different from that used by cable repairmen to detect cable line damage. The company originally started out in the cable TV industry and is using similar technology to design these texting radar guns. Cable repairmen look for places where a cable is damaged (by rodents or other elements) by searching for frequency leaks, and a similar concept is being applied on the ComSonics radar gun.

The device, if and when it is successfully implemented statewide and beyond, is expected to give police control over road safety and safe driving behavior, saving lives in the process. The device is reported to be near production, but it will need to be approved by authorities and accepted as a standard equipment by law enforcement bodies before it can be widely employed.

According to the Center for Disease Control and Prevention, more than a thousand injuries and nine deaths every day are attributed to distracted drivers. Virginia Tech University research, which made headlines across the country in 2009 with its study on cell phones and their contribution to distracted driving, reported that text messaging can increase the chances of a near-crash or a crash by as much as twenty three times.

During the after-shocks of the research team’s revelations, it was found that while everyone seems to know that texting puts the drivers, their passengers and others on the street at risk, many continued to indulge in such behavior.

From data discovered in 2011, the many causes of distraction during driving include reaching for a cell phone or dialing, talking or listening and texting. Of these, reaching for a cell phone or dialing was followed by texting in terms of increasing the vulnerability to crashes and near-crashes. A 2013 study at the Cohen Children’s Medical Center in New Hyde Park, New York found that over three thousand teens die each year because of text messaging while driving. But yet another shocking study from Wayne State the following year found that the older a person gets, the more dangerous they are if they are driving while texting. The study observed experts at one-handed texting on smartphones and found that hundred percent of the older drivers tend to switch from lane to lane when texting behind the wheel.

Hands-Free Texting May Be Just as Unsafe

Even advanced technology that lets you keep your hands on the steering wheel doesn’t seem to make texting safe while driving. Research conducted at the University of Central Florida on forty subjects driving while wearing the Google Glass also found that it is just as dangerous as using a phone, as was expected. Google Glass allows the wearer to send text messages through head commands and voice transcription. The study found that while it may be argued that hands-free devices keep eyes on the road, they do not necessarily mean that the driver is seeing.

Privacy Among The Most Concerning Issue For Critics of The Technology

The radar gun, it is hoped, will be able to curb irresponsible driving. At the same time, there are some concerns that have been voiced about the technology.

Critics are quick to raise the issue of privacy and it’s a very valid concern.  If this device can pick up frequencies, who says that it can’t read the content of texts as well?  How will it determine if the text is from the driver of the vehicle or simply a passenger?

Comsonics assures that the device is not capable of decrypting text sent by drivers and thus can’t read content.  I imagine this will be highly debated when the company tries to seek approval for various law enforcement agencies and when requesting legal approval.

Another concern that people are voicing is whether the radar gun will be able to pick up radio frequencies used by voice to text technologies (as with Google Glass) and inaccurately report it as a violation of the texting ban. So far, hands-free messages are not outlawed. There are also questions of how accurately the device will operate, given that passengers in the car may also be using text messaging. There are also questions being raised on the subject of whether officers will need a search warrant to look through the driver’s phone.

At the moment, there are already a few options for drivers to take their driving behavior in their own hands and disable or monitor texts in the vehicle with AT&T’s DriveMode app or the DriveScribe app. However, in light of studies that suggest people engage in dangerous texting while driving behavior anyway, external intervention may be needed from law enforcement agencies.

The technology will be particularly useful in states like Michigan, Florida, and Virginia where texting behind the wheel is banned but talking on the phone for adult drivers is not. Should the concerns with the device be resolved and the radar gun smoothly deployed across Florida, it may be able to help law enforcement tackle one of the biggest safety hazards on the road today and one of the leading causes of auto accidents nationwide.